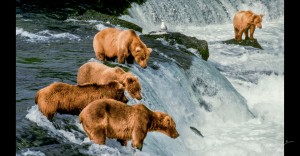 Grizzly Bears are normally solitary animals coming together only to mate or feed. In this photograph the bears have congregated at the falls to fish for Sockeye Salmon. When the fish are plentiful a bear may only wait a few minutes to catch one. After feeding on its catch the bear will leave and another will try his/her luck. At the time this photo was made there was a lack of salmon jumping the falls. Each bear became impatient and moved slowly into position until there were five bears anxiously waiting for their meal. Although for a different purpose I joined the bears, and the Gull, and waited for a salmon to jump adding the final touch to this image.