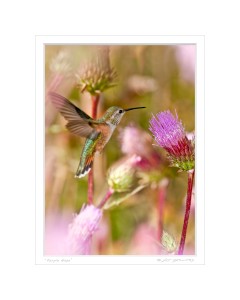 The was taken the second summer after a large fire at Lake Tahoe burned 3500 acres. If you have seen my other hummingbird photos you may know that the first year after the fire I witnessed an amazing amount of hummingbirds gathering for food at a patch of thistle. The thistle patches were even more abundant this time and I wondered if the hummingbirds would return and be as concentrated as before. Sure enough, they returned in large numbers, and much earlier than the previous year.
Again, I returned several times to photograph this amazing site and the abundant rufous humming birds. Of the hundreds of images I made this season, I particularly like this one. I hope you do, too.